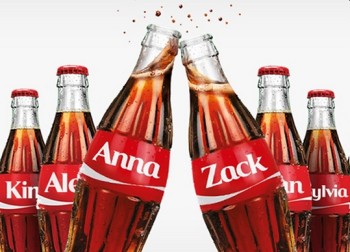 So why should the print industry care about Coca-Cola?

Well, Coca-Cola is one of the world’s most iconic brands and one of the most successful companies of all time. It has a market cap of around $185bn and employs over 130,000 people in over 200 countries across the globe. Coca-Cola has paid a quarterly dividend since 1920 and has increased its dividend payment to shareholders in each of the last 50 years. All this from a company that sells products that no-one needs and where any number of alternatives are available.

Coca-Cola is a slick operation – their bottling and distribution models are studied across the world, but most admired is their marketing. Coca-Cola understands consumers and it understands marketing. They hire top talent and give them the budget to do their job. If you work in marketing, a job with Coca-Cola is like playing for Barcelona or Bayern Munich.

If your company or brand does numbers like Coca-Cola, maybe you know best, but every other switched on marketer keeps a very close eye on what Coca-Cola does – because they don’t often get it wrong (with the notable exception of New Coke!).

Coca-Cola is so big that it can use entire countries – or even continents – for test marketing and they do the kind of detailed scientific research that other companies can only dream of. No Surprise then, when Coca-Cola gets a hit. No surprise either that marketing departments in other companies try to emulate their successes – and that’s not just in the food and beverage industry.

That’s what makes personalisation or variable data on packaging and labels such a big deal. Clearly it works for Coca-Cola – they wouldn’t have rolled this out to over 50 countries if they weren’t getting a measured return on their investment. That means they will be doing more of it and that means lots of other brands will want to do it as well.

Did you get those numbers for digitally printed labels? 865.5 Million.

Variable data isn’t just about putting names on Coke bottles – far from it. As digital print can increasingly meet the stringent quality requirements of the big brands and as the speed of digital presses continues to improve there will be lots of opportunities for printers who can provide this kind of service.

Imagine being able to offer regional variations, dynamic promotions, different statutory labelling for different markets. With the expected resurgence in QR codes (due to new smart phones with built-in, one touch scanning capability), the possibilities for variable data print on product packaging and labels are huge.

If you can’t provide this kind of service, expect to lose business to a printer who can. Because Coca-Cola has hit a home run with this one, other brand marketers will be looking at the potential of variable data and you can bet they will be asking you about it.

If you are in the fortunate position of already being tooled up to offer variable data printing for labels and packaging, it should be an easy proposition to take to the market. If anyone doesn’t ‘get’ variable data, just tell them to look at Coca-Cola!