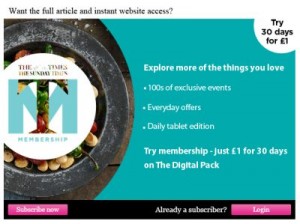 The Times – if you want to read it, you’ll have to pay for it…

As print circulation figures continue to decline, it is fascinating to watch the major titles scramble around trying to make sense of the online world. Newspaper publishers now call themselves content providers and talk about ‘platforms’, ‘reach’ and ‘engagement’.

With ad revenue from print declining as marketing budgets are diverted to ‘online’, there have been two distinct approaches to ‘news’. 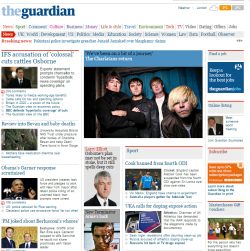 On one side are those – like The Times – who thought ‘content’ was worth paying for and implemented a paid subscription model. In the opposite corner are those – like the Guardian – who give away their ‘news’ in the expectation of gaining revenue from display ads and other on page and off page marketing efforts.

The thinking behind each model is pretty straightforward.

Those with a paywall believe that quality content has a value and if writers and reporters are to be paid, consumers will have to pay upfront for their efforts.

The ‘free’ model thinking goes something like this… No-one is going to pay for ‘news’ as there is so much freely available anyway. But if you build a site that gets enough traffic, the ad revenue and other marketing will pay for the creative staff.

As with most things in life, it’s not a simple either/or equation…

The Times Newspapers posted a profit of £1.7m last year – their first in 13 years – with digital membership accounting for just over half of the Times paid sales (54%). The Sunday Times digital figures stood at 38%.

The Guardian measures its online success in eyeballs, with a claimed 42m + global visitors in October 2014.

While both the Times and Guardian will happily pontificate on the quality of their news and the integrity of their journalism, it is interesting to note that The Times now receives less than half its revenue from advertising, so you could argue that the subscription model means less influence from advertisers on editorial content.

If you land on the Times web site, they still have advertising and they will try to sell stuff – but the news content dominates. Many of the multitude of Times ‘clubs’ and other JV marketing opportunities are tucked away at the bottom of the page. This could just be because the digital marketers haven’t taken over at the Times just yet; but hopefully it’s because your subs help to pay for on-line experience that – if not exactly ad-free – isn’t the attention-grabbing, marketing free-for-all that many sites have become.

Visit the Guardian web site, and you’ll find plenty of ads and pitches for holidays, T-shirts, dating, jobs, and any number of ‘masterclasses’. Even though the Scott Trust subsidy means that the Guardian doesn’t operate under the same commercial imperatives as its competitors, it seems the digital marketers can’t see all that traffic going to waste – might as well try to sell them something while they’re here…

There are enough organisations out there demonstrating that you can make money with both a subscription model or with a ‘free’ content model (or a combination of the two). For print newspaper brands (or should that be ‘news content providers’) the danger of the latter is that you run the risk of writing for search engines, traffic and clicks rather than for quality.

The irony of the positioning of the Times and Guardian online is that the much-derided capitalist Murdoch empire is less dependent on advertisers than the sandal-wearing, liberal lefties at the Guardian. In old-fashioned newspaper terms, for now the Times online is still a broadsheet whereas the Guardian online seems to have gone a bit, well, tabloid…