Actually, there is one less trade association to worry about as the News Media Association is born out of the merger of the Newspaper Society – which represented regional press – and the Newspaper Publishers Association, the trade body for national news publishers.

The News Media Association describes itself as ‘the voice of national, regional and local news media organisations in the UK’, and will be chaired by former Newspaper Society president Adrian Jeakins.

Leaving aside the question of whether news media organisations – given their business – actually need another ‘voice’, reporting of the birth of the NMA has largely lamented the loss of the word ‘newspaper’ which had graced the titles of the two venerable trade bodies it replaces.

In these days of multi-media publication and every newspaper printer rushing to become a ‘content provider’, at least we should be grateful that ‘content’ and ‘digital’ aren’t included in the new moniker.

To demonstrate its new credentials, the NMA has a trendy logo and shiny new web site. If not wholly embracing the world of social media, it has at least set up a presence on Twitter (say hello @newsmediaorg). 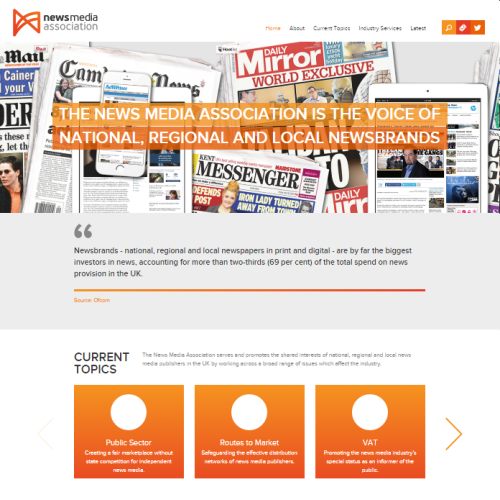 The NMA sets out to ‘serve the shared interests of news media publishers in the UK and protect the general interests of its members in all political, legal and regulatory matters’.

If you are keen to find out more about trade associations representing print and related industries, go now to the PrintTrends web site, where you can find more trade associations than you knew existed. And if your favourite is missing, do let us know!