We all know that newsprint is an essential weapon in the arsenal when it comes to dealing with the menace of the humble house fly (don’t try it with your eReader!), but this campaign in Sri Lanka used print in a more serious way to help educate – and protect – the Sri Lankan population during an outbreak of Dengue fever. 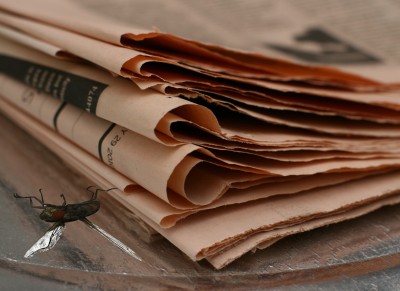 Fly v Newsprint – there was only ever going to be one winner!

Mawbima, a national newspaper in Sri Lanka, was working on a campaign around National Dengue Week and came up with the idea of adding Citronella – a natural mosquito repellant – to the ink used to print the newspaper.

In conjunction with an education campaign in the paper, the print itself would act to protect the reader from mosquito bites. This appears to have been particularly effective as most people read the newspaper in the early morning and in the evening – the very times the mosquito is most active.

Just goes to show the versatility of print!