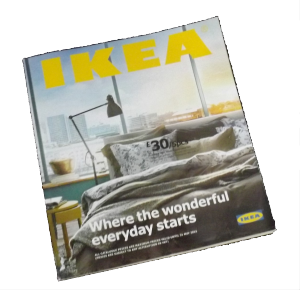 I don’t suppose I was the only one to hear the gentle thud of the new IKEA catalogue landing in the hallway last week.

Over 200 milllion copies of the catalogue were printed in 29 languages and 62 editions, so there is a pretty good chance that you got one, too.

Wait a minute, though… why is IKEA printing a 300-odd page catalogue in 2014? Don’t they know everything is online these days? Don’t they understand the internet and social media? And what about the carbon footprint? Aren’t they just wasting money and ruining the planet?

IKEA is the world’s largest furniture retailer and operates in over 40 countries throughout the world, employing over 135,000 people. On turnover of around €28bn they are still making a decent profit (€3.3bn in 2013) in what have been difficult trading times for retailers.

Clearly they have a pretty good idea how to run a profitable business. And they are growing – IKEA has ambitious plans to increase sales to €50bn by 2020.

If the printed catalogue wasn’t making a clear contribution to sales and growth you can bet it wouldn’t exist. The people running this company aren’t daft and they wouldn’t be producing over 200m copies of a print catalogue without a very good idea of the ROI.

How Green is that Catalogue?

What about the environment? Surely it can’t be very green to be producing over 200m colour catalogues every year?

If you are looking for green credentials, our Swedish friends at IKEA could very well be the corporate poster boys (well, poster people, perhaps – they are hot on gender equality, too) for the environmentalists.

Allowing for the fact that every organisation has an environmental footprint, you have to say that IKEA is more than holding its own on the sustainability front. They are building wind farms to provide green energy, they have over half a million solar panels installed on buildings across the world and you can even charge your electric car at all their UK stores.

Wood comes from sustainable sources and they are planting trees quicker than they  cut them down. They have annual targets for reducing carbon emissions and water consumption while increasing recycling.

And it’s not just their own operations that are subject to sustainability targets – they impose these right across the supply chain. If you want to be a supplier to IKEA, you’d better have some pretty good environmental credentials and be prepared to be audited, too.

The IKEA 2015 catalogue must be the most environmentally-friendly print run ever. The entire catalogue production chain, from forest to printer is Forest Stewardship Council certified. Printers used by IKEA have to meet the IKEA supplier code of conduct which includes a variety of sustainability requirements. 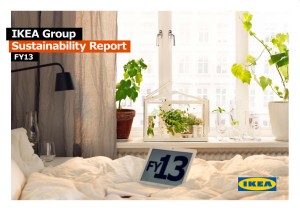 While other corporations might have some woolly statement about sustainability on their web site, IKEA publishes targets, detailed annual sustainability reports and even has a Chief Sustainability Officer on the payroll.

It’s no surprise, then, that IKEA won Company of the Year at BusinessGreen Leaders Awards earlier this summer. Its company-wide commitment to sustainability was described as “one of the most ambitious green business strategies ever enacted by a major corporation”.

Given IKEAs green credentials, you just know that the printing of over 200m catalogues – no matter how environmentally friendly the print run – will have been given a great deal of thought at the highest level. And you also know that some ‘Digital Content Manager’ would have been presenting a case for spending a chunk of that print money online.

Imagine how compelling the commercial case must have been for the print catalogue for a business like IKEA to sanction it.

If the ROI on the print catalogue was unknown, marginal or even not critical to the business, it would not exist. If there was a sound case for ROI by diverting the print spend to online, you know IKEA would have taken that option.

How about the internet? Shouldn’t IKEA be doing more online?

IKEA has around 12,000 products available on it’s web site and ikea.com had 1.3bn visits in 2013. How does that stack up with your ecommerce offering?

IKEA gets the online stuff, but it still chooses to invest in print. Not just any print, though. Digital print means they can produce 62 editions in 29 languages. The quality of the print is excellent and the impact on the environment is probably as small as it could be in 2014.

But it’s not just about using the latest print technology to achieve a cost-efficient and environmentally-friendly catalogue. The IKEA catalogue is part of a growing trend to integrate print with online through augmented reality.

Download the IKEA app, point your smartphone or tablet at the marked pages in the catalogue and you can see what that coffee table would look like in your room. Or check what the current special offers are online. Or find out more about how IKEA sources its salmon.

Not sure what augmented reality is all about? Have a look at this video:-

The IKEA catalogue shows that print isn’t an old-fashioned medium only suited to the older demographic that hasn’t embraced the internet. Print is an essential marketing tool at the leading edge of technology and a great way to bridge the offline and online world.

So next time a Marketing Manager (or Social Media Manager or Brand Evangelist or VP of Customer Experience) tells you that their marketing spend is all going on Google Adwords, Facebook Ads, promoted Tweets or other online activities, tell them about IKEA. Show them the numbers and ask how their business stacks up against the Swedes. Or better still, take out the 2015 IKEA catalogue and your smartphone and show them what they are missing!